by Soojin Um Staff Writer In a scene from the movie Ghostbusters, when describing what the end of the world would look like, Bill Murray’s character famously says, “Dogs and cats living together, mass hysteria!” In the real world, when a sudden rain storm hits, people often exclaim, “It’s raining cats and dogs out there!” Then there’s the classic line, “They fight like cats and dogs.” These are just three examples of what popular culture and the general public think about the relationship between dogs and cats. In short, it’s not optimistic. However, we know that that’s not necessarily how it has to be. 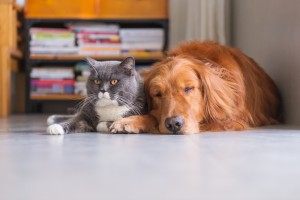 Many homes have both dogs and cats, and in most cases they get along just fine. Often, they were raised together from when they were both very young. Even when some adult dogs and cats meet for the first time, they’re not always confrontational. Often enough, however, they do react in an unfriendly way. Usually, the dog appears as the aggressor. After all, they tend to be bigger. However, even small dogs often chase cats. Why is this? The most prominent reason is, it’s a biological thing. There are rarely, if at all, two species out in the wild that get along with one another. For one, they compete for food and other resources, which is crucial to survival. Secondly, one species is frequently a food source of the other. Another factor could be that different species can’t mate. After all, survival is the ultimate goal, not just of oneself but also of the greater community. 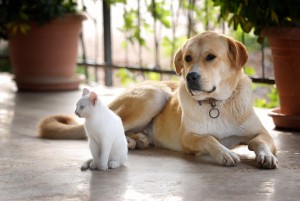 Both dogs and cats are hunters and carnivores. However, of those two groups, dogs tend to be more physically dominant. Feral dogs can and do eat cats in the wild. Thus, cats are always wary of any threat, real and potential. An animal that hunts and is bigger than the cat will trigger the cat’s flight response. Any fleeing animal will trigger the dog’s chase instincts. The rest, they say, is history. So, is it a lost cause then? If you don’t raise dogs and cats together from puppy- and kitten-hood, are they doomed to be adversaries for life, forced together under one roof in a constant state of cold war? Not necessarily. Some dog and cat breeds tend to be more social than others, and are perfectly able to get along with the enemy, er, the other species. For dogs, Labs and Golden Retrievers tend to top the list in terms of friendliness. Beagles, Pugs, and Bulldogs also score high in this regard. As for cats, the breeds that frequently come out on top for friendliness to dogs are the Ragdoll, Maine Coon, and the American Shorthair. Birmans, Japanese Bobtails, and Tonkinese also fare very well. 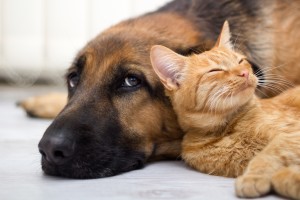 It’s important to note, however, that breed alone does not guarantee your dog or cat will get along with the other. Animals, just like people, can have varying personalities, despite their general reputation. Socialization is the key factor in how your pet will react to other animals. Ultimately, the personality and temperament your dog or cat is born with is not something we can control. However, we can make sure to train them as best we can to maximize the chances of a peaceful coexistence and even friendship. Please let us know your thoughts on this topic and/or give us feedback here or on Facebook.
Menu
Twitter
Facebook
Pinterest
Youtube
Instagram