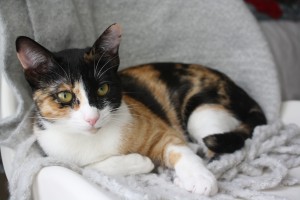 The big cats, such as the leopard and the jaguar, have spots. So does the cheetah. So does, also, the lynx and the bobcat. These cats live in the wild, often in jungle environments, and these spotted patterns on their coats help to provide camouflage so as to give them an added security for their survival. That begs the question: Then, why do domesticated cats have these patterns? Many house cats have coat patterns similar to their cousins in the wild. In contrast, dogs generally have coats that are vastly different than that of wolves. Why is this? There could be two possibilities. First, it could be because cats were domesticated far later than dogs were (and there’s even debate as to how domesticated cats really are). Second, maybe we humans had a hand in the natural process of adaptation to suit our purposes. 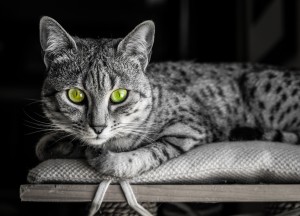 It’s a scientific fact that domestication of animals has resulted in the coats of those animals to have changed colors. Not so much that domestication itself magically changes fur to change color but because with domestication, there is little to no “natural selection pressure” for the species to stamp out an unusual color pattern. A tuxedo cat, for example, would be hard pressed to blend in with a natural landscape of a forest or grassland with its stark black and white coat. When there is a genetic mutation that causes a unique coat color, we humans generally find that appealing. We tend to like novelties. However, in the wild, that unique animal could be more easily killed by predators or not be “attractive” enough to find a mate to pass on that trait. This attraction business is a real thing in nature, by the way. Humans aren’t the only ones to be particular of one another’s appearance.

As for cats with spots, how did they get that way, are they descendants of the jungle cats who needed camouflage protection? Scientists aren’t completely sure yet. While it is true that some domestic cats were crossbred with wildcats, many cats with spotted fur are true domesticated cats. An example of this is the Ocicat. The Ocicat looks like a miniature cheetah, complete with spotted fur on the body, and some black lines on and around the face. However, are these cats wild by nature? No, they are not. It was merely an attempt to breed a house cat to look like the big cats from the wild. Breeders found a way to break up the stripes that are prevalent in mackerel tabbies. This interruption of stripes resulted in a pattern that resembled spots. So, in the case of the Ocicat, they do not have any wild cat DNA in their gene pool. Of course, some cats with spots are descendants of the European and African wild cats. One look and you would not be able to tell the difference between those wild cats and house cats. However, one cannot deny the beauty of those wild cats, and perhaps that can explain why so many breeders chose to incorporate the spotted coat into the modern house cat. It seems it’s the best of both worlds, the exotic beauty of the wild with the familiarity of the domesticated cat. Who wouldn’t love that? Please let us know your thoughts on this topic and/or give us feedback here or on Facebook.
STAY IN THE LOOP
Menu
Twitter Facebook Pinterest Youtube Instagram