Your cat wakes up from a nap after lunch. He stretches and yawns, eyes blinking. Then he reaches out with his paws and starts work on his cat bed. The left and right paws alternate rhythmically, his eyes go into a calm trance. Purring starts to become louder. And as you watch your cat, you secretly wish you could do the same. 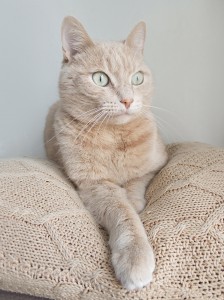 Cats love to knead. It could be a pillow or a blanket or your lap, it doesn’t matter – they just love to knead away on anything soft and squishy. However, the reason why they knead has never been fully answered. The best we’ve been able to do is come up with a few theories. As you will see, though, these theories do make a lot of sense.

The most often stated reason for kneading is that it’s a holdover behavior from when they were kittens. We’ve all heard this one before: kittens knead their mother’s belly to stimulate the flow of milk. When kittens grow up, they hold on to that feeling of comfort, the same way we might feel a sense of joy and nostalgia during the holidays. When cats want to go to their happy place, it’s often back to being comforted by mama cat. That’s when the kneading starts, and their eyes glaze over. If only we had something like that at the end of a long day. 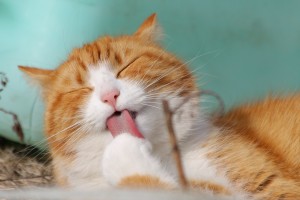 Another theory is that kneading is a way to scent mark their territory. We know that when cats rub their heads and bodies against our legs, it’s not just a sign of affection but also to “mark” us as their property. The same applies to places when they mark an area with urine. Well, it turns out that they may be doing the same when they knead. Cats have scent glands on their paw pads, in addition to ones on their head and body. So, whether it’s people or your blankets or the sofa cushions, it’s very likely that your cat is marking you and your furnishings when they knead. That seems a little sinister, doesn’t it?

The third theory is similar to the explanation given for why dogs walk in circles before lying down. Cats in the wild used to lay down on a bed of grass when going to sleep. In areas where there were tall grass or weeds, they would knead the foliage until a comfortable little area was formed. Of course, they would have to do that every night. Maybe it’s a bit of work, but it seems worth it for a good night’s rest. 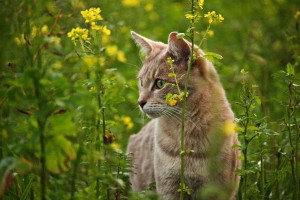 All those theories are well and good, but what if excessive kneading is causing you some problems? Maybe you just bought a new sofa set and your cat had shred them up, or all of your favorite jeans are in tatters at the thigh. Well, there are a few things you could try. One, it’s always a good idea to keep your cat’s claws trimmed. You could do it yourself or you could take your furry friend to a groomer. If you do groom your cat yourself, just be sure to not cut into the quick. That’s very painful and your cat will let you know it.

Another thing you could do is try distracting your cat by getting out his favorite toy or treat. You could also stop your cat from kneading as soon as they start by gently caressing and comforting your cat. That might be enough for him to forget about kneading while he enjoys your efforts to sooth him. These strategies could dissuade kneading from becoming a habit.

However, you should not get angry at your cat for kneading. They won’t understand since they don’t see it as anything wrong. You would end up punishing them for doing something as natural as purring or eating, and your cat could just see you as being hostile. Giving your cat an alternative to kneading, or an alternative object to knead, is much more effective at dealing with this issue than getting mad and creating ill feelings between you both.