Halloween has plenty of iconic imagery, from ghosts and goblins, to witches and vampires, jack-o-lanterns, spooky mansions, and… black cats. Just how did black cats become a part of Halloween tradition, and why are they considered scary and evil? For that, let’s take a look at the fascinating, and sometimes tragic, history of the black cat. Maybe it can explain why they’re lumped in with all those other scary things that go bump in the night. 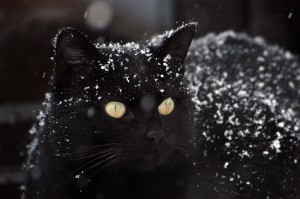 They’re quiet and keep to themselves, and they don’t bother anybody if they can help it. However, black cats have been feared and hated throughout history. Even today, there are many people who are hostile towards black cats (well, cats in general, but especially black cats). Popular culture and fairy tales certainly don’t help when they associate them with witches and the other evil doers.

Where does the connection between witches and black cats come from? It seems it all started with Norse mythology. The goddess Freyja was a very important figure. She was the goddess of many, seemingly conflicting attributes. She represented love and also war, and she was the goddess of both fertility and death. That’s a lot of responsibilities. Anyway, Freyja also practiced a form of sorcery involving casting spells, she was called a witch by the god Loki, and she rode around on a chariot pulled by two cats. 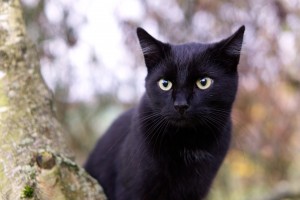 In Medieval times, after the Christianization of Northern Europe, it was widely believed that witches were assisted in their wicked deeds by “familiar spirits” (also shortened to “familiars”). These spirits could take the form of any animal, but a popular animal form was the cat. As they were also supposed to be dark and “smoky” in appearance, people put two and two together and identified black cats as witches’ familiars.

So, why were black cats so enthusiastically nominated to be helpers of evil doers? Why not dogs or horses, or better yet, rats, snakes, or spiders? Why our lovely, furry felines? Well, it could be because cats have an air of mystery about them. They’re primarily nocturnal, they’re solitary, and they’re stealthy, which can make them seem to appear out of nowhere. It also doesn’t help that they tend to stare at people with their resting cat face, which can unnerve some people. 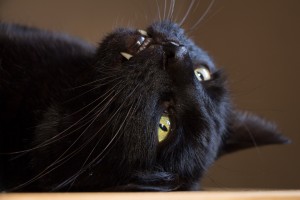 Black cats can seem especially frightening because they can seem like shadows in the night. You can stare into blackness and then suddenly become aware that a pair of eyes are staring right back at you. People used to be very superstitious then, and they were terrified of anything out of the ordinary. When people didn’t understand something or just plain didn’t like something, they associated it with evil. These poor animals just got caught between a historical rock and a hard place, and a great many cats, black or otherwise, paid the price for it.

Luckily modern society is not as superstitious as those in medieval times, but some superstitions still persist. That can come out in hostility, but some people can take it too far. Halloween can still be a dangerous time for black cats. Pet parents of black cats (and even all cats) should be a little cautious during this holiday. Even if people don’t intend to harm anyone, there are pranksters out there who might find it fun to scare cats. If you have a cat that’s primarily outdoors, maybe keep them indoors on Halloween. Give them a special treat, and guard them from scary tricks.