There’s no shortage of photos and videos of cats playing in boxes. Often, the boxes are pretty small, but cats still love to squeeze themselves in. Many cats like to sleep in boxes once they get in there. So why is this? Why do cats love to play in boxes? It doesn’t look too comfortable in there. Well, it seems it’s not just some wacky cat behavior but rather it has to do with biological and psychological traits that they inherited from their ancestors in the wild.

It’s not about the box 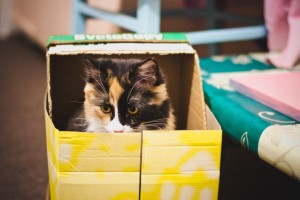 When we buy something or receive a package, our cats get a present too: a box to play in. We watch them crawl or jump inside, and generally let them play in it for a while before we put the box in the recycling bin. We smile, shake our heads, and wonder, “what is it about boxes?” However, it’s not only boxes but any cozy space that attract cats. Given a chance, your cat will snuggle themselves inside duffel bags, open drawers, and paper grocery bags to name a few. Scientists believe it may have to do with snuggling up with their mothers when young. That feeling of being “held tightly” may reduce stress and give cats a feeling of contentment.

The cat cave
In addition to reducing stress, boxes (or any enclosed spaces) provide a sense of security for cats. Having a safe place they can retreat into gives them a sort of “home base” from where they can explore their surroundings with some peace of mind. A study was done in the Netherlands where two groups of cats were introduced to a new environment. For the first group, the room had boxes for the cats, and in the second group there were no boxes. The cats in the first group displayed considerably less stress than those in the second group, and were able to adapt to the new environment a lot faster. It seems boxes are like cat caves where they can relax and be themselves.

Is it hot in here or is it just me? 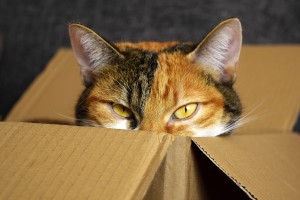 Cats were originally desert animals and thus they are quite comfortable in warm weather. Most mammals, including cats and humans, can regulate internal temperature. The thermoneutral zone measures the external temperature range where an animal can maintain normal internal body temperature. For us, it’s about 75 degrees Fahrenheit. For cats, however, that zone is around 90 degrees. That’s quite a difference. That can explain why even at room temperatures, cats prefer to lay in the sun or crawl under a blanket. So what does this have to do with boxes? Well, snuggling inside a box can mean extra warmth. As stated earlier, it doesn’t have to be boxes but any confined space. When there’s a new box, your cat may explore this new object, but then end up staying it in when he discovers it’s nice and warm in there. Corrugated cardboard boxes insulate rather well, and your cat may enjoy the warm benefits of it. 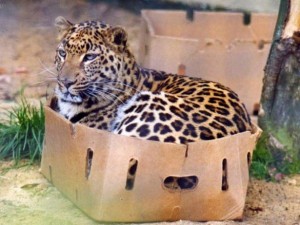 This behavior isn’t just limited to the domesticated housecat. Big cats enjoy climbing inside boxes too. No matter the size of the cat, most cat species tend to be solitary animals. They may just enjoy the same benefits of boxes that our cats do. Certainly they enjoy exploring new objects as well, and might find the warmth pleasing. It seems big or small, cats will always be cats.