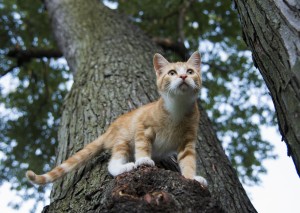 When we see our cats sleeping blissfully on our laps, gently purring away, it’s hard to believe that we are looking at one of the most efficient killing machines on the planet. “Our little Fifi? Sure he likes to chase mice or meow at birds outside the window, but a killer?” The answer is a resounding yes! Cats are so good at hunting, in fact, that entire species have been wiped out in just several generations of their introduction to an area. In many places in the world (including all of Australia), cats are considered a major invasive species. So how exactly did this happen?

Cats have lived with humans for thousands of years, but they were prevalent mostly in the Middle East and North Africa, having descended from the Near Eastern wildcat. As cats became useful hunters, they were adopted by more and more people to rid their farms and homes of rodents. When people began to voyage across the oceans, cats again found a useful role in keeping rats from destroying food stores in the ships. As trade and colonization grew, cats were introduced to many parts of the world that were not their natural habitat. However, cats adapted very quickly. As any cat owner can testify, cats have no trouble coming into a new environment and making it their own. 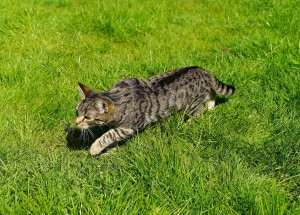 Up to now, people may ask: so, what’s the problem? The problem, unfortunately, is that cats will hunt anything if left to their own devices, and this can have an impact if there are a lot of cats that are on their own. The numbers can be a little disconcerting. For example, in the United States, people own around 75 million cats. In contrast, there are over 60 million feral or stray cats. That’s almost a one-to-one ratio. In the UK, the population of stray cats is smaller, with about 7 million cats owned and approximately 2 million feral cats (though many researchers believe this number is very conservative). However, these numbers are eclipsed by Australia. In Australia, there are just over 2.5 million owned cats, but the number of feral cats is estimated to be around 20 million.

These large numbers of cats, especially in confined areas, can wreak havoc on the local population of small animals and birds. In the United States alone, researchers estimate around 2 billion birds are killed by cats every year. That’s billion, with a “B”. The number of rodents and other small mammals could be five times higher. Cats are credited with the extinction of 33 species throughout the world. Countries like Australia and New Zealand were isolated islands for most of earth’s history, and many species native to there are found nowhere else. Extinction of those species is a huge loss to biodiversity, as well as disrupting the balance of delicate ecosystems. 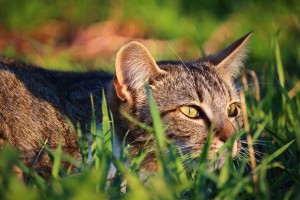 Many scientists say the problem has become very alarming. Government agencies and private organizations are trying to help by reducing the number of feral cats that are out there. Many cities in the United States have instituted trap-neuter-release (TNR) programs to humanely reduce the cat population. The other option is to kill stray cats, but that is very controversial. TNR takes a lot of effort and cost, and it is slow, but proponents say it is the best option we have at the moment. There is also research being conducted to develop an injection to sterilize cats, which could be more efficient and effective than spaying and neutering through TNR. Meanwhile, many species are still under threat. Hopefully an effective solution will be found soon. Who knew we had been living with cold blooded killers all this time?