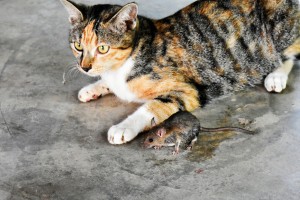 It’s the most iconic notion: cats catch rats. It’s the reason why cats were domesticated in the first place. People had to protect grain stores. It wasn’t birds or rabbits that raided these stores, but rats. To deal with them, humans employed the beautiful but aloof feline to do the dirty work. However, are cats good at it? Some recent observations reveal that they’re not. Unfortunately, that doesn’t tell the whole story. The truth is that cats are very good at it, but only in the right conditions. It turns out that cats, like humans, have to be trained to do certain tasks.

Cats are excellent hunters, just ask Australia and New Zealand of their extinctions of various species of indigenous birds and animals. Cats are so good that they’re sometimes considered to be an invasive species. With rats, however, it seems to be a different story. A recent study showed that cats, even feral ones, were not very effective at catching rats. So, what gives? Have we been misled all this time by cats who just wanted a safe, warm place to sleep? Did cats lie on their résumés just to get a job? 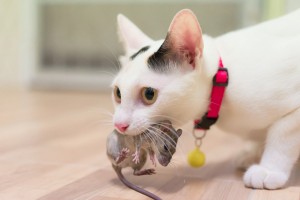 Rats are not small like mice, they can get pretty big. In fact, many large rats are about 2/3 the size of cats and sometimes bigger. Therefore, saying cats are not good at catching rats is a little unfair. After all, what animal can catch and kill prey that are the same size as itself? Not many. It is for this reason that people bred terriers to be ratters. They’re bigger and stronger than cats while retaining similar agility and hunting instincts. That makes them a better match for rats. Also, dogs usually hunt in teams while cats are solitary hunters, and dogs hunt on command to while cats hunt when they want. We can see now why it was much more efficient to use dogs for this purpose.

Before dog lovers start rubbing it in (and you know they’re champing at the bit to do just that), it’s important to note that cats used to be effective ratters themselves. You may ask, “Then what happened? How did felines lose their way?” Well, it’s not so much that cats lost their way on their own, but that the ability to hunt rats was conditioned out of them by humans. Yes, for the most part, we’re to blame. So, how can this be? 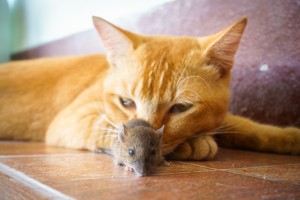 Catching animals that are almost the same size as you is not a natural thing. If there’s a fly buzzing around the house, it doesn’t take much to swat at it. However, if you’re hunting for moose, you better know what you’re doing. It’s the same with our feline friends. Cats will not willingly approach an animal as big as them, especially if the animal is vicious. This goes with feral cats as well. One can be strong and muscular, but that doesn’t automatically make one a good boxer. You need training, and so do cats. Unfortunately, training cats isn’t an easy task; they don’t respond the way dogs do. It appears that cats trained by their mama cats, who are experienced at it, are able and willing to take on rats.

Cats catching rats is something people regard as gospel. It’s just not questioned, and no one gives it a thought. However, it’s very similar to how people get famous quotes wrong. Whether we believe Gandhi taught us to “be the change” or Bogie quipped “Play it again, Sam,” the notion of cats being expert rat hunters is also not quite accurate. The general principle might be true, but what we collectively believe is off. How this happens to our societal psyche, well, that’s a question for psychologists.