When we see cats in popular culture, they’re often depicted next to a saucer of milk. However, what many of us may not know is that cats generally do not digest milk very well. That could lead to health problems, as well as just plain unpleasantness in the litter box. So what should you do if your cat begs for some of the white stuff? You may just have to put your foot down. 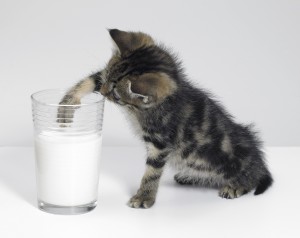 Kittens can ingest milk because they have enzymes called lactase that allows them to break down the sugars in milk called lactose. That doesn’t mean you should give kittens a bunch of cow’s milk, but they at least have the ability to digest the milk sugars. Once weaned, however, cats generally no longer have that ability anymore. That happens pretty quickly too, usually at around 4 weeks old. That’s when the young cat starts to shut down production of the enzyme. Some cats do retain the ability to drink milk, but they are rare cases.

What happens when a lactose intolerant cat drinks milk? Well, generally, not good things. The most common effect of lactose intolerance would be upset stomach. That can show up as diarrhea, which is never pleasant when living with a critter that goes to the bathroom indoors. It can also result in vomiting and stomach pain. 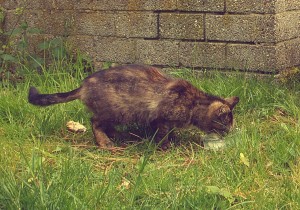 Even if your cat can tolerate milk with little or no problem, there’s still very little reason to give it to them. Cow’s milk is higher in lactose than other milks. Furthermore, even if you were to give your cat goat’s milk or other milk with less lactose content, there aren’t any nutrients in milk that cats need. It is also very calorie dense. Therefore, milk for cats is like what red velvet cake is for humans: it can result in a lot of weight gain while providing very little nutritional value (though very delicious). Your cat may beg you for it, but it would be best to make it a rare treat rather than a frequent staple.

There are products out there that mimic milk and are safe for cats. If your cat must have a milk treat, those products might be a better alternative. Of course, you might want to do some research to see which of those products are safe and are of good quality. However, you should stay away from things such as almond milk and soy milk. Those are foods that were never meant for cats, and could lead to digestive problems and allergies. 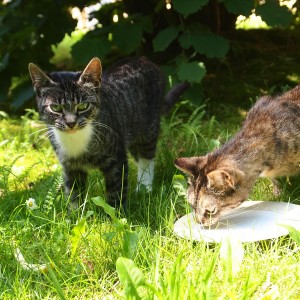 So, do you still want to give your cats some milk? A very tiny bit (like a spoonful) once in a while should not harm your cat in the long run (though it’s always best to check with your veterinarian). A small amount can be used as a treat, something to give your cat as a reward or as part of holiday cheer. Still, it might be best to remember that milk is not an essential food for cats (or for any mammal). Before your cat gets a taste of it, maybe it would be better if they’re not introduced to it in the first place.