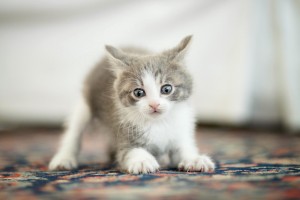 Videos of people scaring cats seems to be very popular these days. An object is placed behind a cat, anything from a cucumber (which was a popular thing a few years ago that, thankfully, seems to have passed) to a person wearing a scary mask, etc. The cat turns and looks, and then jumps five feet in the air. The cat owner can be heard laughing as the cat runs off. Is this funny? For some, it’s hilarious. They can’t seem to get enough. However, most cat parents don’t find it funny at all. Neither do cats. Scaring them may yield a “funny” response, but it can cause long term damage to their psyche. It can also be a detriment to you if your cat can’t trust you anymore. It’s generally a good idea to observe the Golden Rule: Do unto others as you would have them do unto you.

Cats are superb hunters, but they are not apex predators. In fact, cats in the wild are as much prey as they are predators. This is most likely why cats are on edge all the time. As hunters themselves, who better than they to understand what it means to be hunted. So it’s not their fault that they often have trust issues. They do trust us, however, and that’s something. Therefore, we shouldn’t repay that trust by sneaking up and scaring the living daylights out of them with ridiculous stunts. 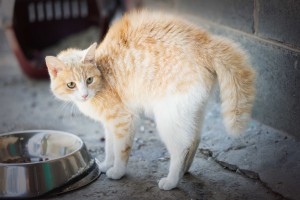 “But it’s just in good fun,” people say. That may be the intent, but let’s put it in a way that we can get some perspective. Would anybody scare their 4 year old daughter by jumping out of the closet dressed in a monster costume? Probably not. If asked why, we would say because it’s not very funny, and because it could cause long term psychological and trust issues. Exactly. So why would we do that to our cats?

Our cats are creatures of routine. So when they see something new, they’re immediately suspicious. If the new thing is unexpected, then they can react with fear. They can also hurt themselves when they run away. If outside, they could run right out into traffic. Inside the home, they can run into an object and injure themselves or you. A scared cat is never pleasant to deal with, and if the thing that’s causing the fear persists, it could turn into a permanent phobia. You’re taking away the one place your cat can feel safe and secure. You could basically end up living with a feral cat. 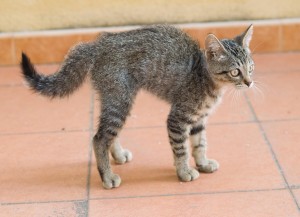 We raise cats because we love them and want them to be a part of the family. They give us their love and trust. To scare them means they have nowhere to go to feel safe. Cats need to feel at home when they’re around us, and the best way to do that is by respecting their comfort zone. Cats don’t understand that we don’t “mean it” when we scare them. In fact, we don’t like it when someone scares us, and that’s even when we know it’s just a joke. For cats (and other pets) who don’t understand what jokes are, it is especially unpleasant.